Samarkand is the second largest city in the Soviet Union. In the fourteenth century Samarkand was the capital of Tamerlane (Timur’s) Empire. He was a Turko-Mongol ruler who conquered a large part of Central Asia and in 1398 captured Delhi, India. Both Ulugh Beg and Bagur Beg, Central Asian leaders, were his descendants. Tamerlane, a great military strategist and fearsome warrior, was also a patron of art and architecture. Some of the mosques, mausoleums and other structures in Samarkand feature polished brick, blue enamelled brick, glazed terracotta and majolica. I visited the city on trips through Central Asia in March and October 1992 and wrote about the region in chapter 9 of Picnic at the Iron Curtain. In 2001 Samarkand was added to UNESCO’s world heritage list. 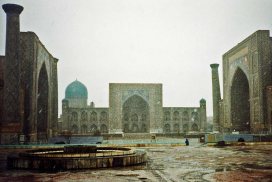 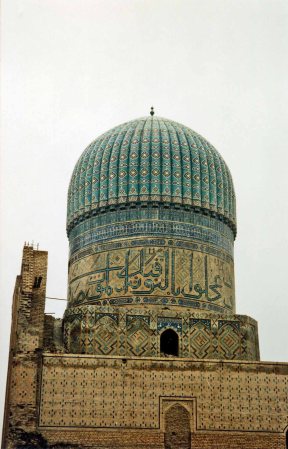